In one of his speeches, Dr. APJ Abdul Kalam had recalled Dr. Vikram Ambalal Sarabhai as one of the greatest leaders who uplifted young talents and gave them space to grow. Kalam said that Dr. Sarabhai recognized his true potential as a young scientist. Although Kalam was not highly qualified but he was encouraged by Sarabhai to work on himself and he eventually became the ‘Missile Man of India’. Not only Kalam, Sarabhai recognized the talent of many young scientists and encouraged them to grow and develop. The former chairman of ISRO, K Kasturirangan happens to be one of the people who started their careers under the supervision of Dr. Sarabhai. 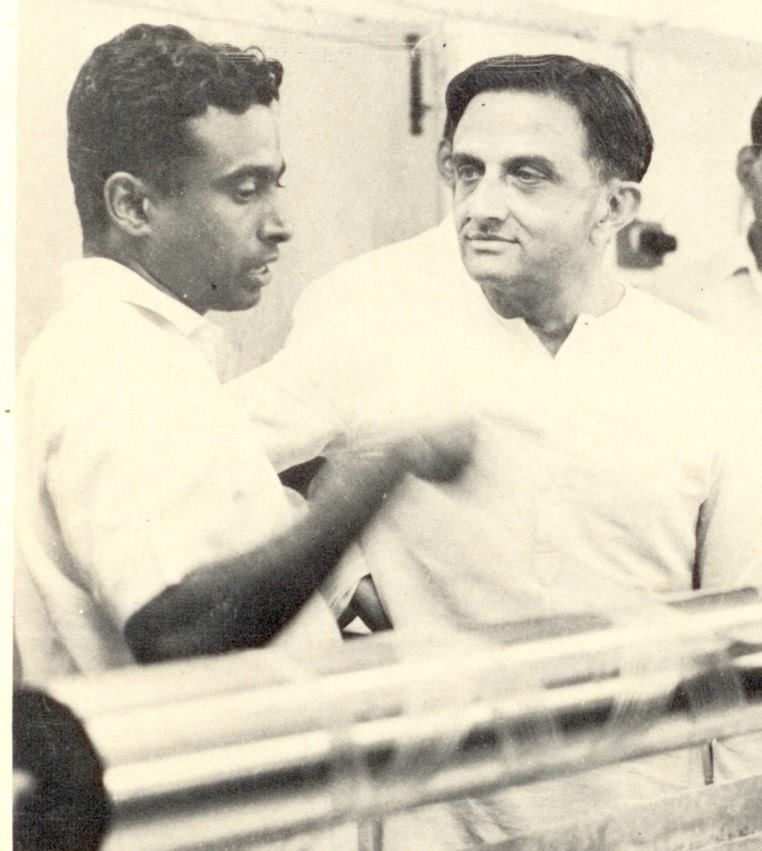 Born on 12th August 1919 Dr. Vikram Ambalal Sarabhai is known as the father of India’s space program. It was him who put India on the international map in the field of space research. He worked in the fields of textiles, pharmaceuticals, nuclear power, electronics, and many others. He founded the Physical Research Laboratory (PRL) in 1947 which acted as a cradle for all scientific research in the country.

Sarabhai first attended Gujarat College, Ahmedabad but later shifted to the University of Cambridge in England where he received his Tripos in Natural Sciences in 1940. At the age of 18 when Sarabhai went to Cambridge to study science, his recommendation letter was written by Tagore. 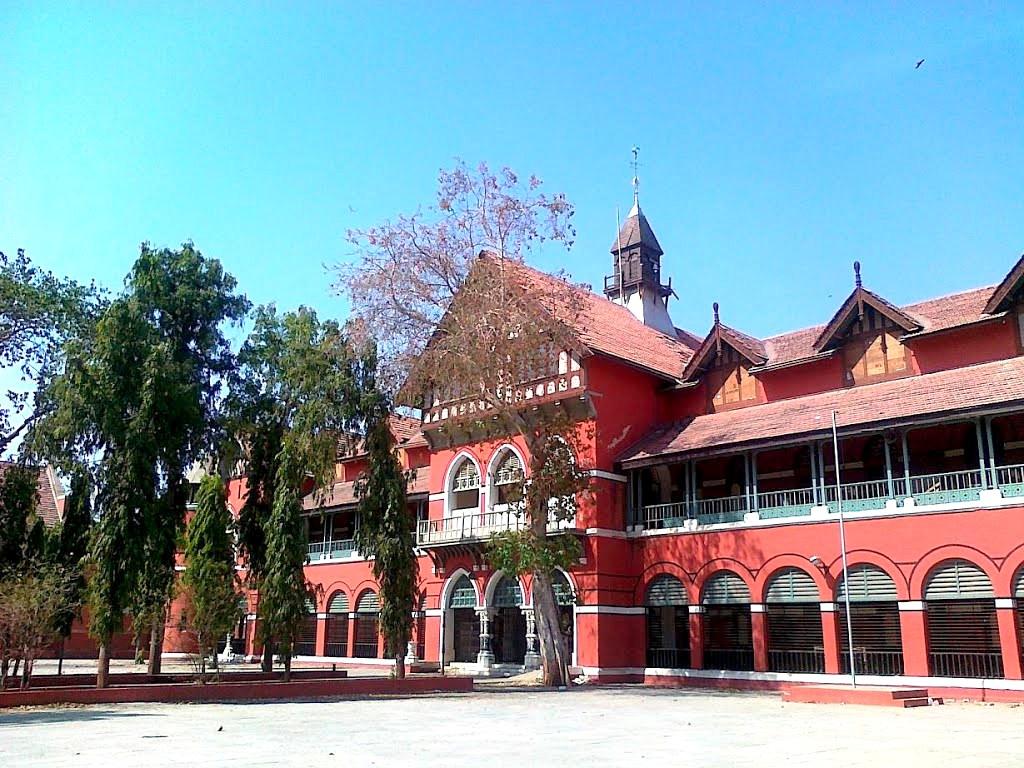 At the outbreak of the Second World War, he returned to India from the University of Cambridge and joined the Indian Institute of Science at Bangalore where he took up research in Cosmic Rays under the supervision of C.V. Raman. He published his first research paper entitled ‘Time Distribution of Cosmic Rays’ in the proceedings of the Indian Academy of Sciences in 1940. His proceedings across several science centers enhanced his interest in solar physics and cosmic rays. A new telescope that could detect and analyze cosmic rays was developed under Sarabhai’s supervision. Later in 1963, he set up India’s first rocket launching station along with Homi Bhabha.

Vikram Sarabhai along with Ahmedabad based businessmen Kasturbhai Lalbhai and Shanti Swaroop Bhatnagar founded the Ahmedabad Textile Industry’s Research Association in 1947. This Association aimed at serving as a research center for textile and allied industries in India.

In India, he studied solar-terrestrial relationships, interplanetary Space, and Geomagnetism. In 1963, India’s first rocket launching station, the Vikram Sarabhai Space Centre was set up under Sarabhai’s supervision, with nuclear physicist Homi J. Bhabha offered his support to the initiative, in Thomba near Tiruvananthapuram. Thumba is a fishing village in Kerala located on the banks of the Arabian Sea. This location was chosen by Sarabhai for its closeness to the Equator. On November 21, 1963, India’s first rocket was launched from this space station.

Later on, the Thumba Equatorial Rocket Launching Station had been recognized as an international scientific facility by the United Nations.

Vikram Sarabhai was the first person to dream of setting up a space center in India, the Indian Institute of Space Research (ISRO). After the successful launch of the Russian Satellite Sputnik 1, Sarabhai talked to the government about setting up ISRO. Although it was not easy to convince them, he was visionary and persuasive. He had no fantasies of sending people to the moon, instead, his focus was to increase the accessibility of science and technology to the common man. He said that he wanted to make India a self-reliant economy using space technology. As a result of his efforts, ISRO was founded in 1962 by the Government of India.

In the late 1960s, Vikram Sarabhai moved away from pure scientific research to articulate the range of applications from the space program. His focus shifted to Nehru’s ideas of applying technology to development. Sarabhai started working on technologies to develop communication, remote sensing and weather forecasting, etc.

Sarabhai was convinced to make India’s satellite communication available for education and information. His main focus was to serve the educational needs of India’s rural population rather than the entertainment wants of the urban masses. It was due to Sarabhai’s efforts that ISRO cooperated with NASA, the Soviet Union, and the Franco-German Symphonie program on various space projects. In 1967 Vikram Sarabhai convinced NASA to grant access for ISRO to its Applications Technology Satellite (ATS)-6 spacecraft for one year. Within a year, ISRO scientists visited the ATS-6 to assess whether its capability suited their needs for developing the Satellite Instructional Television Experiment (SITE).

It was because of Sarabhai’s determination and frantic efforts to work with international space agencies that an Indian Satellite Aryabhata was launched in 1975 from a Russian Cosmodrome and Satellite Instructional Television Experiment (SITE) was launched in collaboration with NASA during July 1975-1976. The foundation of the renowned Vikram Lander was laid by Sarabhai decades ago. According to Sarabhai the landing of Apollo 1 on the surface of moon and man stepping on the moon for the very first time was as significant an event as a man learning that the whole world is a sphere and that it is not the center of the universe.

Interest in Art, Science, and Culture

Sarabhai was fascinated by India’s cultural heritage. He loved Indian dance and music. He often used music as an escape from stress, he had a collection of records from Tagore and Kunder Lal Sehgal, who was his favorite singer. In 1949, he co-founded the Darpana Academy of Performing Arts along with his wife, who was a classical dancer herself.

Contribution to other fields

Sarabhai was more than a scientist. He was a visionary and an exceptional entrepreneur. His contributions are not just limited to the Scientific field. He worked for the development of various other fields like education, communication, remote forecasting, and so on. Being born in a wealthy family in Ahmedabad, he inherited the business skills of his father Ambalal Sarabhai. He helped set up a number of standard educational institutions including:

In spite of Dr. Vikram Sarabhai and Homi J Bhabha’s clashing views on nuclear energy, they were very good friends. Bhabha often teased Sarabhai for his dressing sense that he should dress up more like a scientist than a common man. It was through his connections that Sarabhai met his would-be wife Mrinalini in Ooty while Sarabhai was playing tennis. However, neither of them was attracted to each other in their initial meeting. It was after a few years when Mrinalini started establishing herself as a classical dancer and Sarabhai involved himself in his career when they fell in love and became best friends.

Vikram married Mrinalini in 1942. They had two children together. His son Kartikeya is one of the world’s leading environmental educators and a dedicated community builder. His daughter Mallika is an Indian classical dancer and actress. 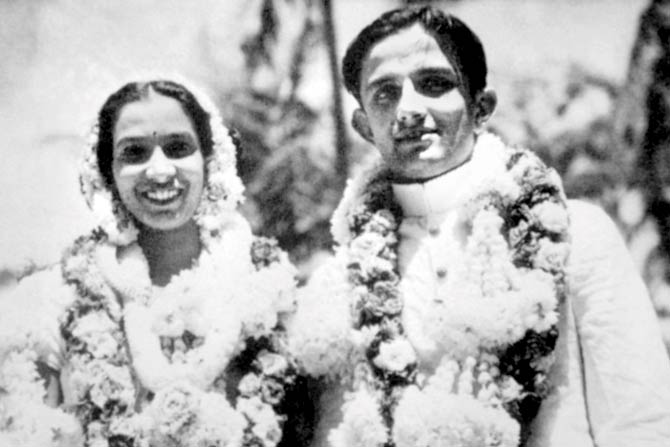 In spite of their sharing a deep connection and love, Mrinalini and Vikram’s marriage did not last long. Towards the end of his life, to take his mind off his disturbed marriage Sarabhai started dating Dr. Kamla Chaudhry. This resulted in a tussle between him and his family. His daughter, Mallika said in an interview that she often used to fight a lot with her father saying that he can’t love two people at the same time and has to choose between Kamla and his family.

Vikram Sarabhai and the Gandhi Family

When Jawahar Lal Nehru, the then Prime Minister, met Vikram Sarabhai while inaugurating the Physical Research laboratory in Ahmedabad, he recognized him (Vikram) as the son of one of the leading mill owners of the city. Their connections run long back when Nehru along with his father Motilal used to occasionally stay in the Palatial Sarabhai House in Shahibaug. 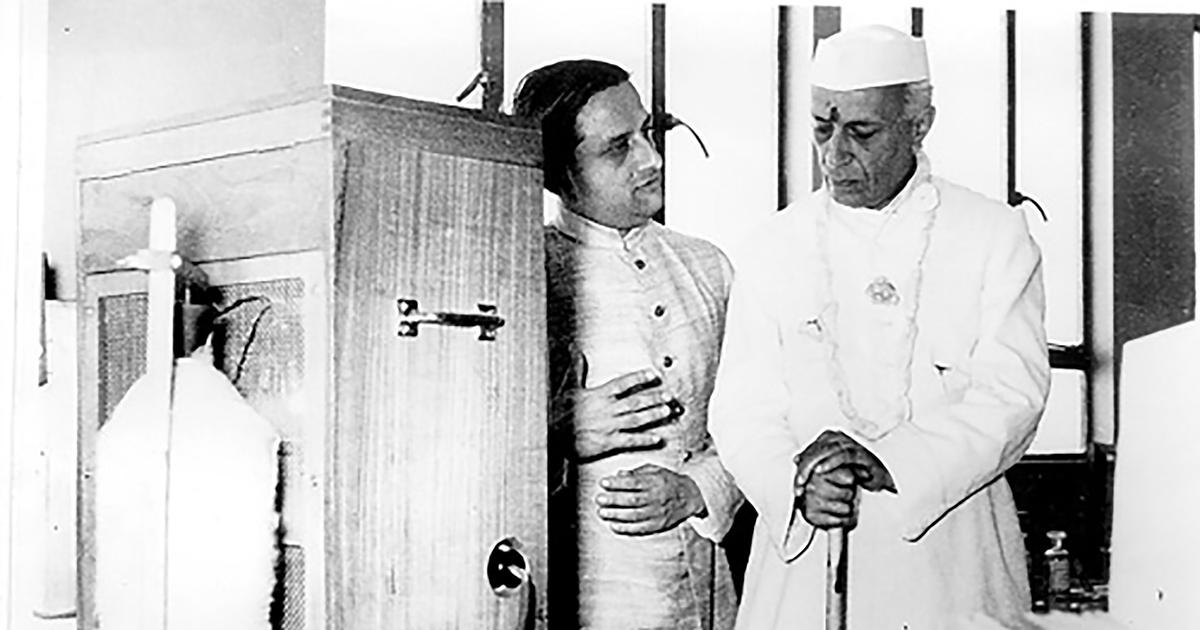 Both, the Sarabhai’s family and Nehru shared close relations with Mahatma Gandhi. The Sarabhai family was a true follower of Mahatma Gandhi. Sources say that Vikram’s family could not even attend his wedding in 1942 as they were busy protesting under Gandhi’s Quit India Movement.

Sarabhai was very close to Indira Gandhi at a professional and personal level. He was very fond of Indira and was frequently seen in her entourage, literally running behind her. When Indira Gandhi used to come to Ahmedabad, he would spend hours in the market searching for the best red roses to make a flower bouquet for her. 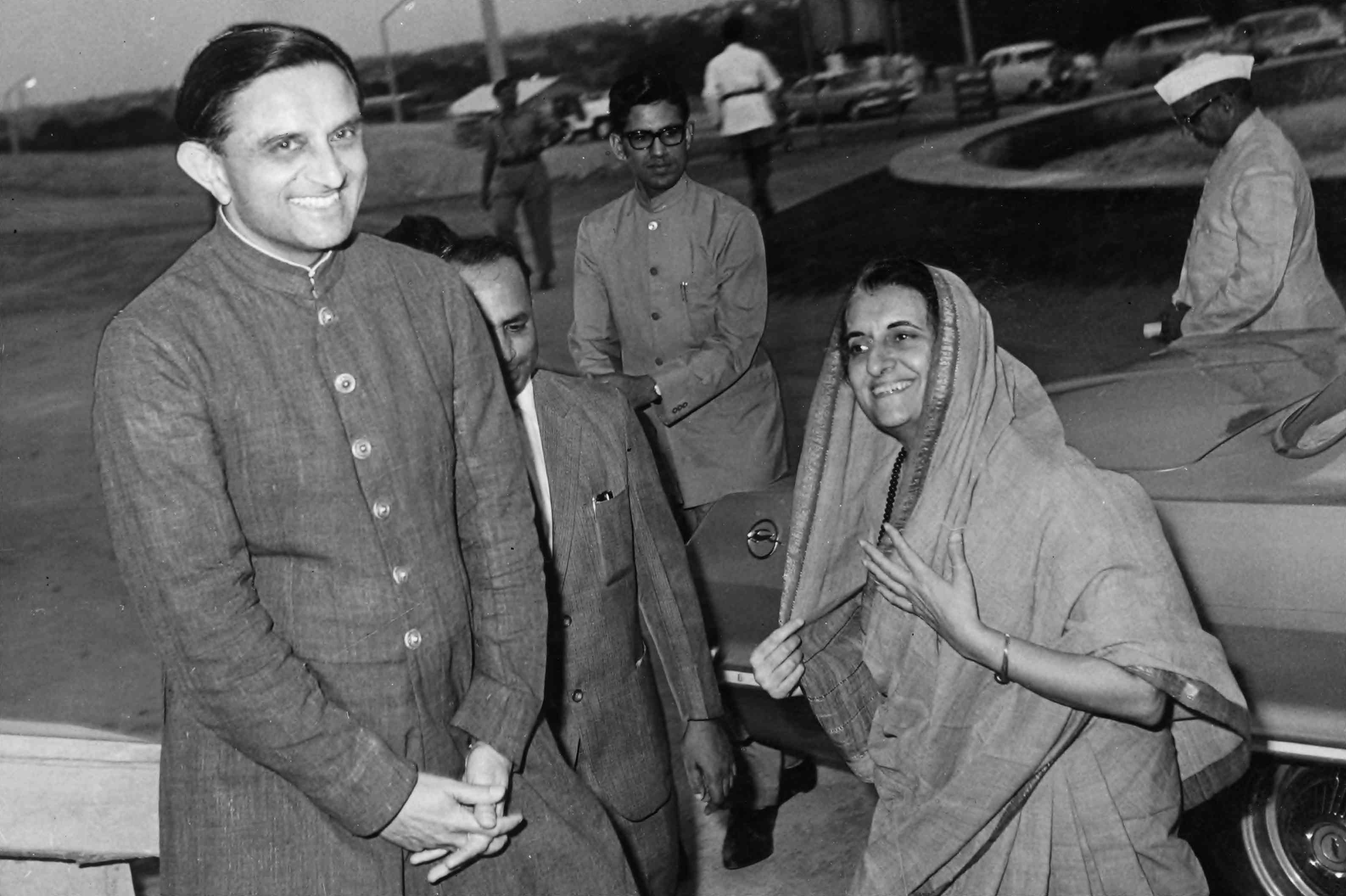 However, in the late 1960s, their personal and professional relationship suffered a fallout. In relation to India’s growing Nuclear energy security concerns, Indira told Sarabhai to slow down his work because at the pace that he was working might result in the government losing him. This comment and lack of trust of Indira on him deeply disturbed Sarabhai. According to his close friends, he even started considering resigning from his post but didn’t.

Dr. Vikram Sarabhai was a huge believer and follower of religion and spirituality. He used to follow Jainism and was often spotted sitting by the Ocean in Tiruvananthapura and reading the Hindu holy book, Bhagavad Gita. Being a scientist when asked about his belief in religion he would say that there is always a creator behind every creation, and no matter how developed we become, we should never forget that God is the ultimate creator. He used to say that God is the truth and will always be, and science was developed by the people who believed in the Almighty, irrespective of their religion.

Sarabhai passed away on 30 December 1971 in a hotel in Trivandrum, Kerala, where he was attending a work meeting. Sarabhai left the world at the young age of 52, leaving an irrecoverable loss in the scientific community, soon after that a crater on the moon was named after him in his honor.

Dr. Vikram A Sarabhai was more than just a physicist. He was honored with Padma Bhushan in 1966 and the Padma Vibhushan (posthumously) in 1972. He also received the Shanti Swarup Bhatnagar Award in 1962 for his contribution towards the development of Indian Space Science and Research.

On the occasion of Vikram Sarabhai’s 100th birth anniversary in 2019, the Indian Space Research Organization (ISRO) announced an award in his name, the Vikram Sarabhai Journalism Award in Space Science Technology and Research. According to ISRO, the award will be given to the journalists who have contributed to the fields of space science, applications, and research.

K Sivan, the current ISRO chief, remembers Dr. Vikram Sarabhai by saying that “Sarabhai’s initial vision that space science and technology must be used for the benefit of the common man has been the guiding force for ISRO.” He added that all of ISRO’s programmes were centered around Sarabhai’s vision which has led to several applications. He further continued saying that now that the organization is meeting all its needs, they are on the path of planting new seeds whose benefits will be reaped in the near future. 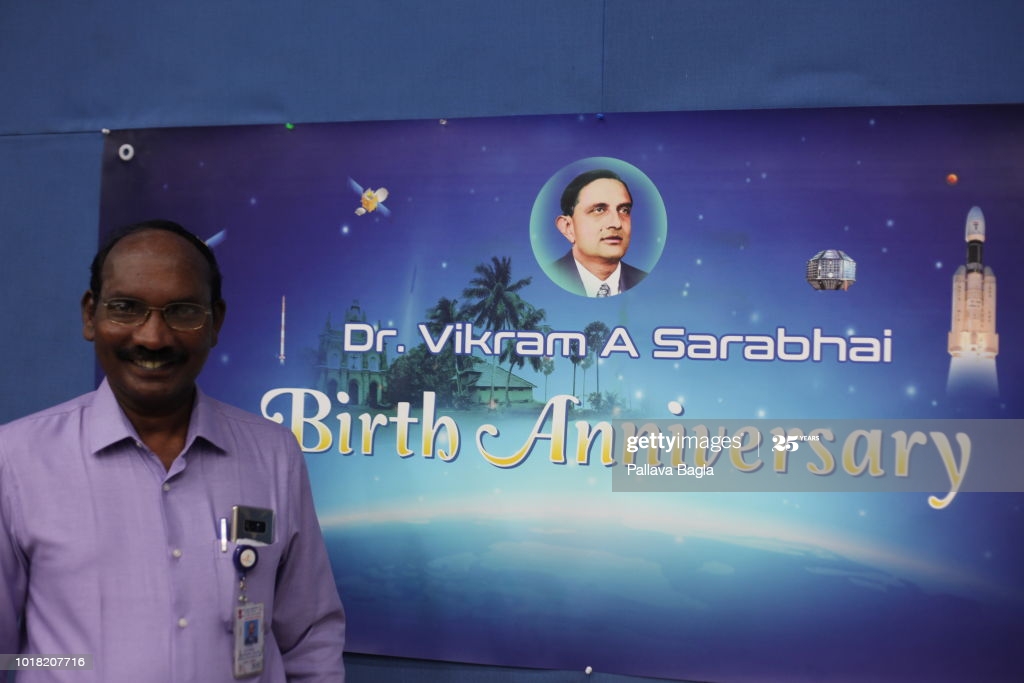 Commemorating the 100th birth anniversary of the father of Indian Space Research on August 12, 2019, PM Modi addressed the nation by saying that it was his vision which made India’s development in terms of science & technology possible. He further quoted Sarabhai’s Vision by saying that the scientist always used to say that as a nation we should not be behind in the areas of science and technology, be it space or nuclear technology, we should be using it for the people of our country. 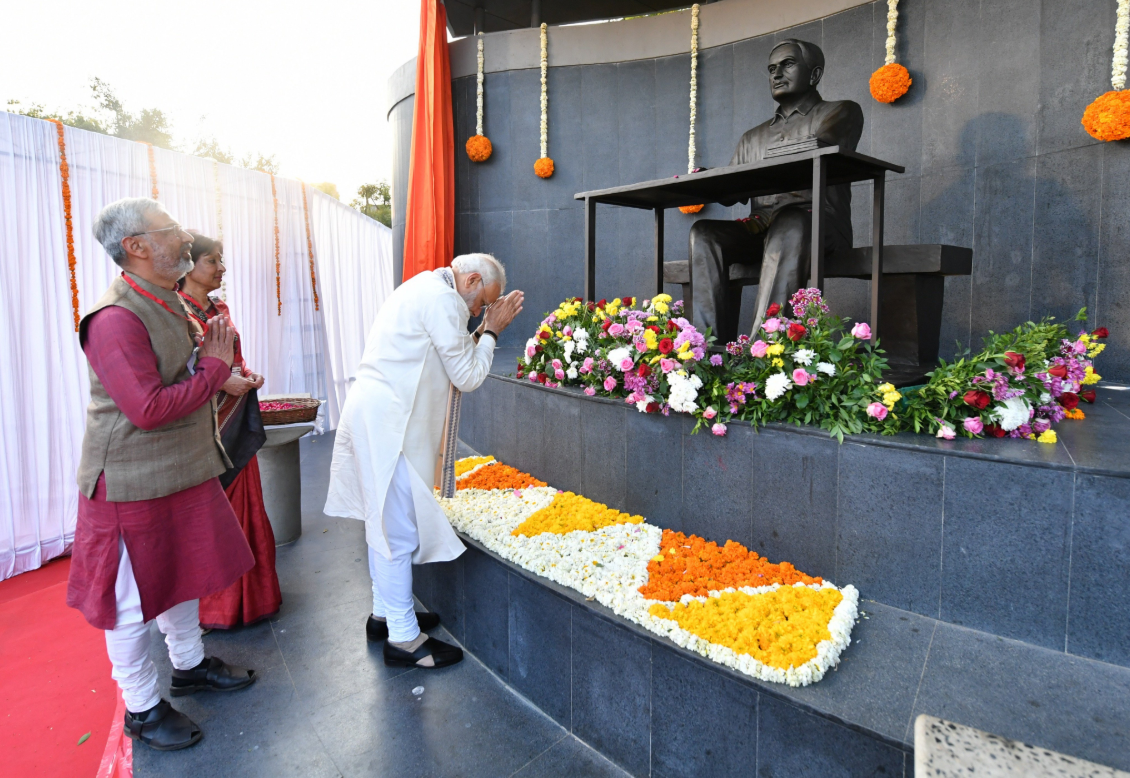 The Tech-Giant, Google featured a doodle of Dr. Vikram Sarabhai on its search engine on August 12, 2019, honoring him on his 100th birth anniversary. The doodle was made by a Mumbai-based guest artist, Pavan Rajurkar.